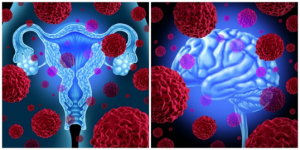 Cancer develops when genetic material (DNA) becomes damaged or changed. We know some cancer causing genetic changes are acquired (i.e. smoking), while others are inherited. Studying cancer genomics explores the differences between cancer cells and normal cells. Advances in understanding how cancer behaves at a genomic and molecular level is helping doctors treat cancer “smarter”.

Ovarian cancer is a leading cause of death for women worldwide. The estimated five-year survival rate for patients whose ovarian cancer is detected early is about 93%. However, only 15% of women are diagnosed at the early stages when treatment is most successful. Ovarian cancer can be difficult to diagnose because initial symptoms are similar to gastrointestinal illness and indigestion.

Using a novel genotyping technique, an international team of scientists from the United Kingdom, the U.S. and Australia analyzed the DNA of almost 100,000 people, including 17,000 patients with the most common type of ovarian cancer. Their findings revealed 12 new genetic variants that raise the likelihood of developing ovarian cancer and could eventually help doctors predict someone’s chances of developing this disease with greater accuracy and/or treat it with greater success.

Another study led by scientists at the Institute of Cancer Research in the UK uncovered 13 new gene mutations linked to increased risk of glioma- the most common form of brain cancer. One of the genetic changes discovered increases risk of brain cancer by as much as 33%, with the rest by at least 15%. These findings are significant as currently there are no effective means to detecting brain cancer early – and this may provide researchers the chance to understand more about how brain cancer develops and how we may one day best treat it, or even prevent it.

Genomics research is helping us attack these cancers – and all types of cancer. NFCR has distinguished itself from other organizations by emphasizing long-term, transformative research and working to move people toward cancer genomics. To learn more about specific research by NFCR-funded scientists, click here.

Your ticket for the: NFCR’s Genomics Newsroom: New genes linked to increased risk of ovarian and brain cancer