The Lucy Fund: Words of a Mother | NFCR

The Lucy Fund: Words of a Mother 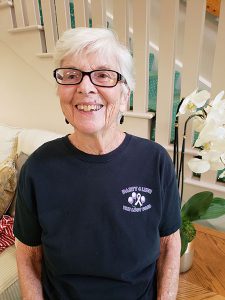 Lucy confronted her diagnosis head on, starting a research fund to help provide resources and hope for finding a cure for all cancers at the deadly, metastatic (spreading) stage. The direct response came as no surprise to those who knew and loved her best, certainly including her mother, Dorothy Elicker.

“My daughter continued to live her life along with the cancer,” says Dorothy. “She didn’t let cancer rule her life or become her.

“Cancer didn’t take over. She was a good role model for a lot of people who came in contact with her because of that. Taking your misfortune and rising above it, moving on.”

Stanovick passed away in 2012, but not before she left a legacy beyond even family, friends, colleagues, students and acquaintances.

In partnering with the National Foundation for Cancer Research in the establishment of the Lucy Fund for Metastatic Cancer Research, Stanovick dedicated her life to “make metastatic breast cancer chronic, not deadly.” Not stopping there, the take-charge Stanovick also organized events such as Party4Life as a way to raise awareness of not only metastatic cancer, but also the research into it—which is currently lacking.

The goal of the Lucy Fund is to fund the science of detecting cancer at its earliest and most curable stages, not when it is already established and actively spreading. And the reasoning is understandable: Once a cancer has metastasized, the cure and survival rates fall drastically. More than 90% of cancer mortalities are due to metastatic cancer. But only 7% of current cancer funding supports research geared towards confronting the mechanisms of metastasis.

The void in metastatic research is profound.

“It’s not stressed in the literature at all,” observes Elicker, who took the reins of the Lucy Fund after her daughter’s passing. “But my daughter refused to be seen as, essentially, dead.”

The Lucy Fund to date has raised more than $330,000, all of which has been dedicated solely to metastatic research. The efforts have helped sustain the research of University of Kansas Cancer Center’s Danny Welch, Ph.D., and too stimulate prognostic and therapeutic research into metastasis in other laboratories.

Dr. Welch, an NFCR-funded fellow, and his team have discovered eight of the 35 known cancer metastasis suppressor genes. Further research based on these discoveries may lead to the design of molecules that either prevent metastasis from happening or arrest metastatic tumors in a dormant state.

“His work was one thing that gave her a glimmer of hope,” Elicker says.

Ironically, the Fund began very simply as a way to set the record straight. Elicker recalls how rumors began to spread that her daughter, since her cancer was so advanced, gave up hope and refused treatment. To convey once and for all that she was indeed seeking available treatments, Stanovick threw a party so everybody could see for themselves just how determined she was to keep on living.

“And somebody put out a bowl and they raised maybe $100,” Elicker recalls. From that sprang the idea to launch a true fundraising organization, as well as the Party4Life fundraising events.

Away from fundraising, but still with an eye to taking cancer out of the abstract realm of “somebody else’s disease,” Stanovick even chronicled her cancer journey in her wryly-titled memoir “Aren’t You Dead Yet? “. Filled with stories about a real woman with anxieties and vulnerabilities, plus lessons she had learned before her cancer diagnosis, the book too continues to inspire.

And while Elicker admits that heading the Lucy Fund is a way of keeping her daughter’s spirit more fully alive, she is not one to pull the heartstrings too hard. The Fund keeps a lot of other people alive too, she reminds.

“She wanted her life and her illness to be not wasted,” Elicker states. “Other people could benefit from this.”

“Having discovered Dr. Welch, Lucy wanted to finance his research so others would be helped.”

Donations to the Lucy Fund can be made directly here.

Your ticket for the: The Lucy Fund: Words of a Mother

The Lucy Fund: Words of a Mother