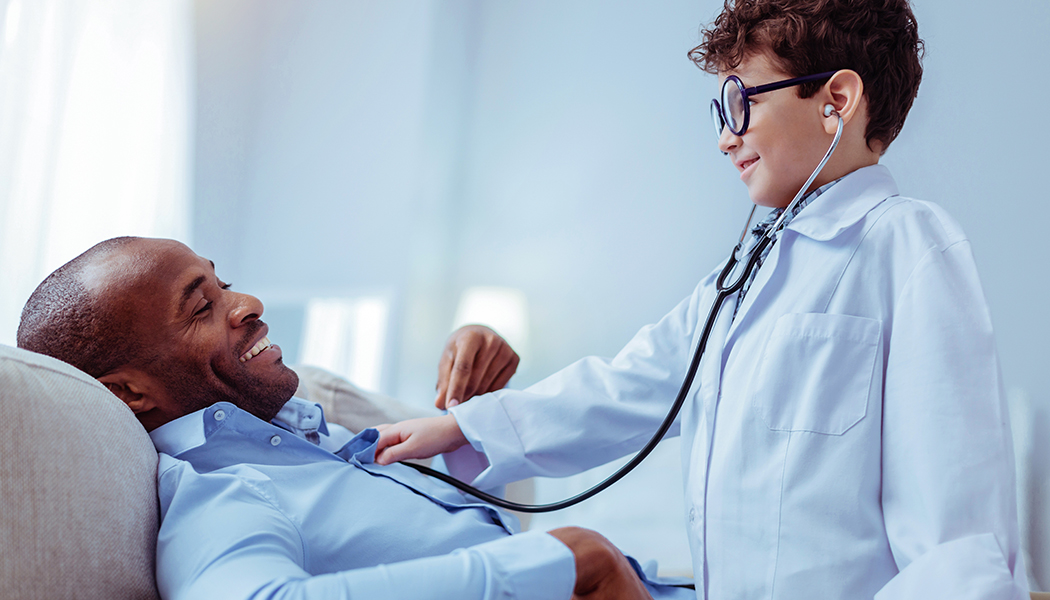 Take advantage of National Men’s Health Month and change what is means to be a MAN! Gender stereotyping are leading to negative health outcomes for men long term.

Men are strong, men are brave, and men are tough. Years of gender stereotyping and bias have ingrained these labels into what society believes a man should be. While none of these phrases are outright hurtful, they contribute to an extremely dangerous social norm. Men who are vulnerable and compassionate are too often deemed ‘unmanly’. This tragic truth has resulted in many men adopting a stoic front and, though it may not seem like it, sacrificing their health. As men are celebrated throughout the month with Father’s Day and National Men’s Health Month, June is the perfect opportunity to encourage men to prioritize their health and change what it means to be a ‘man’.

Growing up, fathers and sons always have a special relationship. Dad is the first role model and first best friend. This relationship allows fathers to teach their sons important life lessons; however, fathers often limit themselves to teaching skills, trades, and sports. While all important things to learn, many fathers have missed the opportunity to talk to their sons about health issues that men commonly face and how to manage them. From telling sons that it is ok to feel pain to talking about the necessities of regular health checkups, having a father-figure prioritize health will likely instill healthy mental and physical health habits in future generations.

Currently, the three cancers with the highest male death rates are, for the most part, either preventable or highly treatable. Lung cancer sits at the top of this list, claiming the lives of 76,000 men each year. On a global scale, men use tobacco more than women which increases their chance of developing lung cancer. Prostate cancer and colorectal cancer, the second and third most deadly cancers amongst men respectively, are often extremely treatable if found early. These cancers, along with several others, have specific screening recommendations. These recommendations aid in detecting cancer at early stages, often resulting in successful treatment. When comparing the number of men who follow these life-saving recommendations to the number of women who do so, men are less likely to schedule regular screenings.  While there is no definitive explanation as to why there is a gap between these two genders, it is likely related to the stereotypes associated with manliness.

“Many of my male patients make sure to tell me that their wife made them schedule their screening,” Dr. Erin Schneider shared. “It’s as if they are nervous that I would judge them for taking initiative in their own health.”

Dr. Schneider continued to explain that even working in a major metropolitan area with many different family structures, the majority of her young male patients are accompanied by a female guardian.

“I think that even in these more progressive times, healthcare is a task that generally falls to mothers,” She said. “It is not a bad thing for mothers or aunties to bring their children in to the doctor, but it is important children see the male figures in their life visit doctors and make healthy life choices. Children are always watching and making connections.”

This Father’s Day, men across the country are encouraged to celebrate the bond between father and son by talking about National Men’s Health Month. It is an opportunity to discuss the diseases of which men are more prone to, such as heart disease and diabetes, and how to take control of one’s own health. To kickstart the conversation, the National Foundation for Cancer Research has put together a Cancer Prevention and Early Detection Kit, including tips on how to lower one’s risk of cancer as well as signs and symptoms of which to be aware. This year, change what it means to be a man.

Additional Reads You May Enjoy:

Why Are Men More Vulnerable to COVID-19? Research Is Gradually Uncovering the Truth

Caring for a Father with Cancer

Health in the Palm of Your Hand: How Your Phone Can Help Keep You Healthy

Your ticket for the: Men’s Health Month – Leading by Example