Play4TheCure is the sport fundraising program of the National Foundation for Cancer Research. Play4TheCure inspires young athletes and their teams to leverage their passion for sports to “Play4” loved ones affected by cancer and encourages them to actively participate in working to fund cancer research to make a difference. Through Play4TheCure, each team is allowed to choose how they fundraise and what type of cancer research they would like to support, with 100% of the proceeds benefiting NFCR-supported scientists. 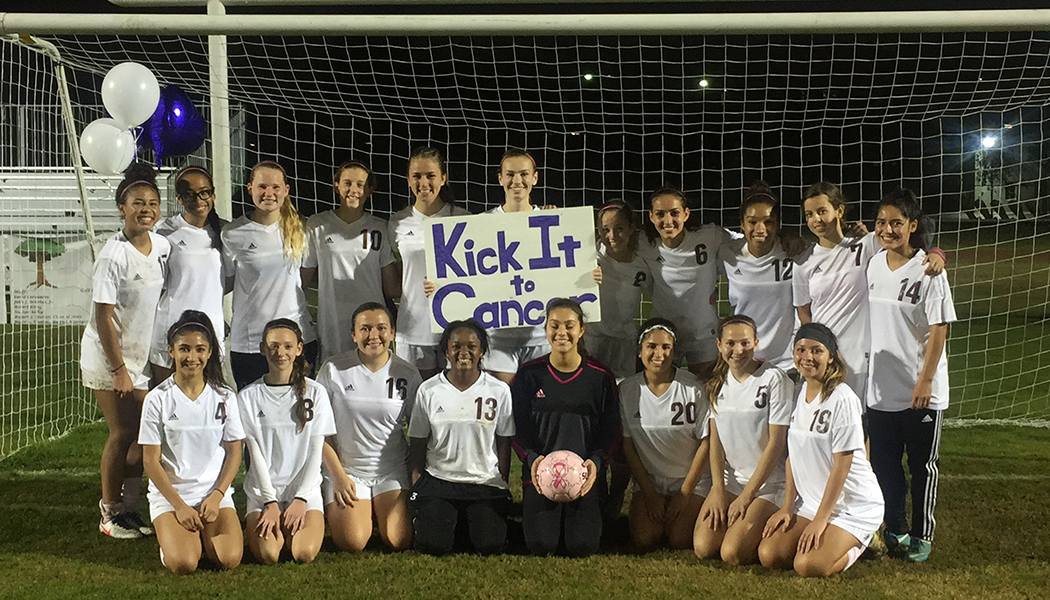 Kim Looney is the Head Girls’ Soccer Coach at Valley Christian High School in Cerritos, CA. Her team started hosting a “Kick it to Cancer” game in 2010 and they haven’t looked back since. Over the past 5 years alone they have raised nearly $25,000. We asked Coach Looney what got her started with Play4TheCure. She shared how it impacts their community and what makes it a success.

Q: When did you start participating in Play4TheCure and why?

KL: I started it because that first year [8 years ago] we had three girls on our team whose dads were going through some sort of cancer treatment.  It was taking its toll on those specific kids and in turn was taking its toll on the team to see our teammates struggling with something so serious in their family.  I heard about the fundraiser through a coaches meeting and felt like this was a way for us as a team to help not only the families on our team, but the surrounding community as everyone knows someone who has had cancer, has passed away from cancer or is in remission.

Q: What fundraising tactics have you found to be especially effective?

KL: We have a donation jar at our front gate.  We collect raffle prizes so that people can buy raffle tickets as well.  Our prizes have ranged from extravagant to simple.  We have had a 55” television, an iPad, Lakers tickets, Galaxy tickets, several bikes and a weekend away in San Diego.  But then we have simple gifts as well; Restaurant gift cards, passes to the aquarium, gift baskets, etc.

We have learned not to make more expensive prizes higher prices on the raffle tickets.  Instead, all raffle tickets are the same prize and the more you buy, the less you pay for each one.

Our canteen is open for the game and our booster club allows all proceeds from that to go to the fundraiser.  We did have a very generous business owner in the past donate 300 meals from the In-N-Out food truck.  His company would receive one every year and he gave it to us. We charged $5 a meal and the first 300 kids got In-N-Out for lunch the day of the fundraiser.  That was $1500 made each year before the game!

Q: What is the atmosphere is like on Gameday?

KL: The atmosphere is electric on game day!  We decorate with balloons and signs. Each season we try and pick a rival team to play against.  Putting the fundraiser on that night fuels my kids even more to want to win.  They know the stands are going to be full not only to watch a great game, but to support a cause we have taking ownership of. The kids honor victims and survivors in their lives to play for that night that has been affected some way by cancer.  They wear the names on a band around their ankle during the game and those people are recognized at half time.

Q: How do you see this event impacting your community?

KL: The impact I hope to make each year is first with the girls.  I want them to understand that there are people out in our own lives who have it rough and need healthy bodies like ours to keep getting the message out there that we need a cure.  The more we advocate, the better medicine can become.  This is a disease that unfortunately effects all of us in one way or another.

Our community is very giving; monetarily they will always give to a cause that is special to certain groups.  We have grown a following over the years. People will come each year that don’t come to regular games because they appreciate the fact that we want to raise awareness.

Q: I’ve seen in pictures that you give a speech during the game. What do you usually share with the fans?

KL: I usually share with fans the reason we do this every year.  I thank them for their continued support.  Each year, there is a personal story I share whether it is someone who has been effected in my life or my family’s life or sometimes a story in one of the kids’ lives.

On January 19, 2018 the Valley Christian Crusaders Girls’ Soccer team will once again Kick It to Cancer as they take on Maranatha High School in Cerritos, CA. For more information about their efforts you can follow them on twitter at @VCHS_Athletics.

If you’re interested in uniting your team through a cause, email Play4TheCure@nfcr.org to get started! For more updates on Play4TheCure visit our Twitter: @P4TC_NFCR.

Your ticket for the: Q&A with Play4TheCure Coach Kim Looney