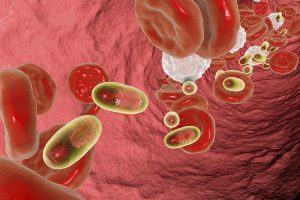 The term nanomedicine, alluding to technologies with mechanisms and surface area characteristics sized in terms of billionths of a meter, has held promise for years, but breakthroughs specific to therapies have been limited. After five years of intense collaborative work by distinguished scientists from Arizona State University (ASU) and China’s National Center for Nanoscience and Technology (NCNST), a potential major one has ensued. Their new technology may prove to be among the first capable of successfully distinguishing and delivering precise drugs to cancer-cells. This dual action development could represent a major milestone for oncology nanomedicine.

“These nanorobots can be programmed to transport molecular payloads and cause on-site tumor blood supply blockages, which can lead to tissue death and shrink the tumor,” said Baoquan Ding, a professor at the NCNST.

The nanorobots in question are tiny drug delivery systems which can both recognize the cancerous cells molecular signals and offload a proper treatment. The treatment agent is a blood-clotting enzyme, called thrombin, which blocks the blood flow to cancer cells, cutting off their life-sustaining nutrients and ultimately causing them to die. The nanorobots swiftly, and in large numbers, aggregate together at the heart of the tumor by recognizing a specific tumor endothelial protein, called nucleolin. Only tumor cells express this protein in large numbers, and this recognition process is crucial. It ensures that thrombin will only be delivered to tumors and therefore not spark clot formation in and around healthy tissue.

The active clot-forming enzyme is transported on what can best be envisioned as a rectangular DNA origami sheet, 90 by 60 nanometers in size. This is one-thousandth the width of a human hair! This origami DNA sheet is folded in on itself in intricate ways, ultimately forming a hollow tube. Within this tube are an average of four Thrombin enzymes. This whole DNA origami apparatus actually is the nanorobot. After the nanorobot has completed its task, it safely degrades and is easily and naturally excreted by the body.

This nanotechnology has shown to be successful and safe on mice and larger animals, working swiftly and being generally expelled within 24 hours of being introduction into the blood stream. In a primary mouse lung cancer model, this thrombosis triggered tumor shrinkage in only two weeks. Similarly, in a melanoma mouse model, almost 40% of tumors showed complete regression and the median survival time for the cancer-stricken mice more than doubled. In these models, not only were the primary tumors impacted, but further metastasis (cancer spread) was also prevented.

“The thrombin delivery DNA nanorobot constitutes a major advance in the application of DNA nanotechnology for cancer therapy,” said Hao Yan, the director of the ASU Biodesign Institute’s Center for Molecular Design and Biomimetics and the Milton Glick Professor in the School of Molecular Sciences.

The America-China team expects to pair up with clinical partners in the near future where they can further the technology and move towards commercialization. They anticipate these DNA nanorobot’s will be tested on humans in two of five years. The technology is expected to serve as a platform for future nanomedical treatments. Other cancer therapies such as chemotherapy and immunotherapy, as well as treatments for other chronic diseases, may too be administered using this delivery system—potentially opening a new frontier.

The National Foundation for Cancer Research currently funds two scientists whose work includes potentially transformative nano-scale cancer diagnostic technologies. Rakesh Jain, Ph.D., and his collaborators have recently developed a next-generation diagnostic tool of in vivo optical imaging utilizing nano-sized quantum dots to capture detailed images of internal body structures. Such imaging could potentially be used to study how the blood flow pattern in a tumor changes as the tumor develops, and may also lead to new ways of monitoring disease progression or responsiveness to a drug treatment.

Ovarian cancer expert and NFCR-supported physician scientist, Robert Bast, Jr., M.D., is developing an early detection tool of carbon nanotubes that emit a fluorescent signal when irradiated with a specific light to locate ovarian cancer. He and collaborators are planning a future use where the administered nanotubes may be linked with antibodies against ovarian cancer biomarkers and will accumulate at tiny tumors (100 ovarian cancer cells) for early detection.

Within the cancer nanomedicine therapy field and comparable in some respects to the ASU and NCNST initiative, Esther Chang, Ph.D., who received NFCR funding for over 20 years from 1988 to 2013, and her team have developed a nanoscale drug delivery system that carries anti-cancer agents (like the p53 tumor suppressor gene) directly to both primary and metastatic tumor cells. Clinical trials are now treating patients with brain, pancreatic and other advanced cancers and preliminary results appear to be promising.

Sign-up to receive related articles directly in your inbox:

Your ticket for the: Potential Breakthrough in Cancer-Fighting Nanomedicine