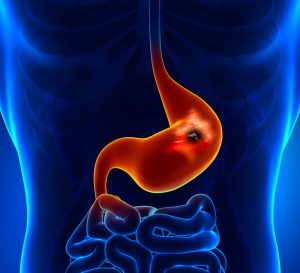 Although stomach (AKA gastric) cancer is the third deadliest cancer in the world, claiming an estimated 10,960 lives in the United States alone in 2017, it remains one of the more difficult cancers to notice and detect. Indeed, more than two-thirds of patients are diagnosed only after the disease is at an advanced stage. A recent study out of Singapore, hailed as “landmark,” offers the potential to develop more effective screening for stomach cancer, enabling timely and better early-stage treatments.

The study focuses on a known risk factor for stomach cancer called intestinal metaplasia (IM). Patients with IM are six times more likely to develop stomach cancer than those without. The Singaporean team, composed of researchers from the National University Health System (NUHS) and the Duke University-National University of Singapore (Duke-NUS) Medical School, has used genomic technologies to better understand the pre-cancer role of IM, as well as that of Helicobacter pylori bacteria, which is also linked to the condition.

“Previous genetic studies on IM have mainly focused on patients who were already diagnosed with stomach cancer. But these are limited in their ability to predict who are likely to develop the disease and how the disease will progress,” said Professor Patrick Tan, co-lead investigator and a Duke-NUS Medical School professor. “This new study is the first to comprehensively map out the genetic changes in IM in a cohort of stomach cancer-free subjects, which helps us better predict the possible occurrence and progression of the disease.”

“Our study is the largest series of IM to be studied in detail by genetic analysis,” says Dr. Yeoh Khay Guan, co-lead investigator and Deputy Chief Executive at NUHS. “These new findings help us understand why some people have a higher risk of progression to stomach cancer, and identify those who may benefit from closer follow-up to prevent cancer or to detect it early so that it can be cured.”

Pertaining to at least one National Foundation for Cancer Research (NFCR) initiative associated with this theme of genetic research into gastric cancer, an initiative for new precision oncology treatment approaches was conducted by the Foundation in connection with its Tissue Bank Consortium in China and other scientists. A multi-disciplinary team led by NFCR scientist, Wei Zhang, Ph.D., analyzed Next Generation Sequencing data from hundreds of gastric cancer samples from the Bank, discovering defects in three cellular signaling pathways (BRCA2, Wnt and PI3-K-ERBB4). Several newly developed drugs that target these pathways have also been tested in breast and ovarian cancers, and may lead to improved treatments for patients with stomach cancer.

Please take a moment to share this important message with your friends.

Your ticket for the: Study Better Predicts Stomach Cancer