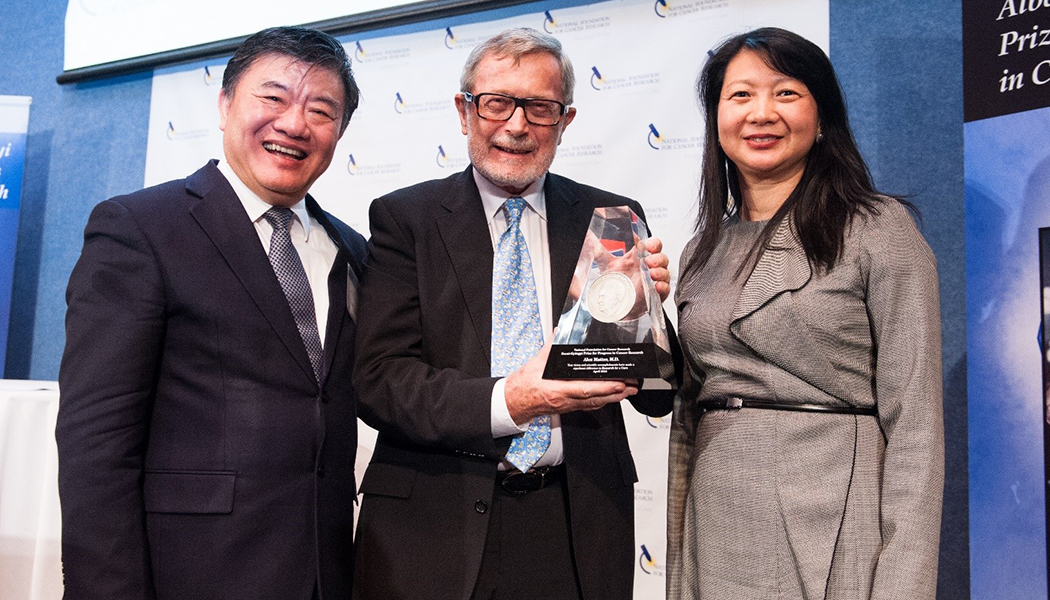 “I was attracted, even as a youngster, by infectious diseases and cancer,” recalls Alex Matter, M.D.

That young boy would pursue these passions and, in adulthood, emerge as a leading global authority in the disease field. Now the CEO of the Agency for Science, Technology and Research, or A*STAR, the Swiss-born and Singapore-based Matter is the scientist most directly responsible for the development of Gleevec, the first drug specifically targeting a molecular lesion in cancer.

The Philadelphia chromosome is the most frequent karyotypic aberration in adults with acute lymphocytic leukemia, occurring in up to 30% of adult patients with ALL overall. Nearly 90% of all CML cases are Ph+. Prior to Gleevec, both required chemotherapy and bone marrow transplants. Though even then, that treatment regimen had dismal survival rates, hovering around 20% in even the best of cases.

However, “as a rule, imatinib mesylate induces a long-lasting remission of the disease in the large majority of cases, provided they are Philadelphia chromosome 1 positive,” explains Matter, with a succinctness which downplays tremendously what has been one of the biggest advances in cancer therapy in recent memory.

While it may be hyperbolic to hail any therapy, no matter how successful, as a “miracle drug,” Gleevec very nearly fits the bill. In one study, after 60 months of therapy, 98% of patients had shown a complete hematologic response. The estimated overall survival rate for patients, also at 60 months, was 89%, with a relapse rate of only about 17%.

Imatinib mesylate, instead of attacking tumors directly, takes a more surreptitious route: neutralizing the enzymes and proteins tumors need to survive. In effect, tumors are starved to death from the inside out.

But if Matter is succinct, he is also humble, being the first to admit that his research was just one part of a story that began all the way back in the 1960s. Gleevec is a casebook study of how different lines of research, some not in any way related to any other, can come together. The drug, whose discovery and development won Matter the prestigious Szent-Györgyi Prize for Cancer Research in 2013, was the product of many minds, and he gives credit where credit is due.

Says Matter, “The basis for the drug started with the discovery of the Philadelphia chromosome by Drs. Peter Nowell and David Hungerford, followed by the 1973 identification by Janet Rowley of the reciprocal translocation of chromosomes 9 and 22.”

From there, Gerard Grosveld identified the bcr-abl gene in CML and its product, a fusion protein that was analogous to the fusion product observed in the abl virus (v-abl). It was on this basis that Matter’s group was able, in 1985, to produce the biological tools, the assays and the first compounds. Biologist Nick Lydon, chemist Juerg Zimmermann and clinical investigator Brian Druker had vital roles.

Independently, Herbert Abelson discovered in 1969 a virus that caused virulent leukemias in mice. Working with this virus, David Baltimore’s group demonstrated the oncogenic potential of v-abl and Owen Witte’s group discovered the precise anatomy of the bcr-abl fusion protein and its tyrosine kinase function.

Bringing It to Market

“From then on, seeing the impressive remissions, everything went very quickly,” Matter recalls, “and after submission in 2001, and (U.S. Food and Drug Administration) review in record time, we obtained approval.”

The rest is medical history, but the research is not stopping. Although now 79 and looking forward to retirement, Matter tells how, via a seven-year collaboration with others, researchers have identified so-called Mnk1/2 inhibitors that can inhibit the growth of imatinib-resistant blast cells of CML (blast cells arise at the end stage of the disease). These inhibitors have seen Phase I trials in healthy volunteers and are slated to move forward in patient trials.

And so it continues: Whereas Matter took up the baton from those that came before, so now he passes that same baton on to those continuing the race.

Your ticket for the: Alex Matter: Making Targeted Therapy a Reality