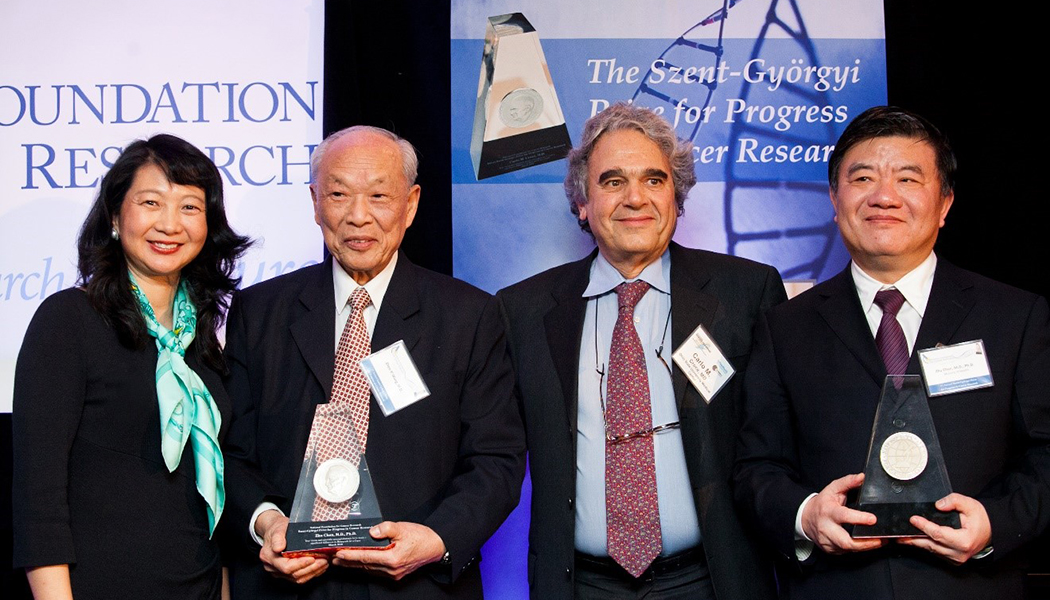 There was a time when if you were diagnosed with acute promyelocytic leukemia, or APL, the prognosis was grim. First discovered in 1957, APL is a form of acute myeloid leukemia, where immature white blood cells called promyelocytes accumulate in the bone marrow. The overgrowth of promyelocytes leads to a shortage of normal white and red blood cells and platelets in the body, which causes many of the signs and symptoms of the condition, including pallor, bruises, fatigue and bleeding from the nose and gums. While the disease is rare, left untreated, death is astonishingly swift—even for cancer.

But due to work led by the winners of the National Foundation for Cancer Research’s 2012 Szent-Györgyi Prize for Progress in Cancer Research, less than a half-century would pass before one of the deadliest forms of cancer too became one of the most readily cured. Zhen-Yi Wang, M.D., and Zhu Chen, M.D., Ph.D., and their teams in China collaborated to ensure the transformation of APL from death sentence to highly treatable condition. One would do so by championing treatment that, historically, had nothing to do with addressing cancer, while the other would call upon a product associated in the public’s mind with assured demise.

Wang tapped all-trans retinoic acid, known as ATRA for short, a medication most often used for acne, whereas Chen turned to a notoriously deadly element, arsenic. Both led to one of the most dramatic turnarounds in oncological history, plus an exquisite example of medicines complementing one another.

Quite an Analogy—the Perfect Combination of Scientists & Drugs

In his Szent-Györgyi Prize acceptance speech, Wang gave a short history of his collaboration with Chen and the results: “In 2000, we combined arsenic trioxide and all-trans retinoic acid together. We raised the (APL) remission rate to 90% and five-year survival to 95%. So you can see big process in this disease… With these two drugs, we can prevent a relapse and have a very long-term survival.”

What was once considered as one of the most malignant forms of human leukemia was quickly transformed into a highly curable one. The remission rates for APL soared and long-term survival now exceeds 75%.

“It is an example of the combination, or integration, of Eastern and Western culture and medicine,” Wang continued in his speech. “Confucian principles highlight two things: benevolence and the humanities. That means educating rather than killing malignant elements. Not to kill, but to transform malignant things into benign things.”

ATRA does just that, by transforming malignant cells into relatively harmless ones. It was Chen that then pioneered the concept of synergistic cancer targeting therapy and provided the first successful model in the treatment of APL with ATRA and arsenic trioxide, which has turned a fatal hematological malignancy to a curable disease, annually benefiting thousands of APL patients worldwide. The concept of synergistic targeting cancer therapy based on Chen and Wang’s translational research shed new light on the treatment of human malignancies.

Wang told how arsenic trioxide was long a cancer staple in Chinese traditional medicine, which often uses a “fighting fire with fire” mentality. In the case of arsenic trioxide and cancer, he described that using a toxic substance against a toxic malignancy is in line with standard principles. The healing (and deadly) properties of arsenic have been known in both East and West for millennia. The Ancient Greek “father of medicine,” Hippocrates, noted it was used to treat skin ulcers in 370 BC. But high toxicity led to its virtual abandonment by doctors in the 18th century.

“Our new approach means we need not only kill malignant cells but also educate these cells to undergo differentiation, maturation and cell death,” Chen told the National Academy of Sciences in 2004. “We have demonstrated the new approach to APL works because it may cure the disease in the majority of patients. We are showing how a combination of Western biomedical sciences and oriental philosophy as well as medical practice could bring new benefit to cancer therapy.”

It brings to mind another ancient philosophy: You can’t argue with success.

Your ticket for the: Zhen-Yi Wang & Zhu Chen: Quite a Combination