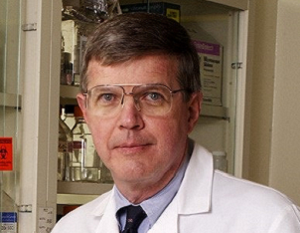 Improving early detection techniques is important for many types of cancer, but it is especially important for ovarian cancer, as it is likely the most effective way to achieve a cure. In fact, the five-year survival rate for ovarian cancer is above 90% if found during the earliest stage. Unfortunately, only 15% of cases are diagnosed at this stage, making ovarian cancer a notorious “silent killer”. Throughout his entire career, Dr. Bast has been working to change that.

Dr. Bast is best known for developing the OC125 (CA125) monoclonal antibody in 1981 that led to the production of the CA125 radioimmunoassay – the first useful biomarker for monitoring the course of patients with epithelial ovarian cancer. Since this discovery, Dr. Bast and his team have been evaluating ways CA125 can be used to screen for ovarian cancer. For example, results from a large clinical trial involving 200,000 women in the United Kingdom showed that Dr. Bast’s “two-step” approach for the early detection of ovarian cancer – using CA125 detection and sonography – effectively reduces fatalities by 20%.

Dr. Bast is currently testing a panel of biomarkers (that include CA125 plus six auto–antibodies) to see if it is more sensitive than using the CA125 biomarker alone. This has the potential to produce an even more sensitive early detection screening tool.

Robert C. Bast, Jr., M.D., received his B.A. from Wesleyan University and his M.D. from Harvard Medical School. He completed a medical internship at the Johns Hopkins Hospital and then served as a research associate at the National Cancer Institute. After Dr. Bast completed a medical residency at the Peter Bent Brigham Hospital and a fellowship in Medical Oncology at the Dana-Farber Cancer Institute, he joined the faculty at Harvard and the Dana-Farber Cancer Institute. Dr. Bast joined the Duke University Medical Center in 1984 and, ten years later, Dr. Bast was recruited to head the Division of Medicine at the University of Texas MD Anderson Cancer Center. In 2000, Dr. Bast was appointed Vice President for Translational Research at MD Anderson Cancer Center and, in 2004, he became the Harry Carothers Wiess Distinguished University Professor for Cancer Research.

Dr. Bast has published more than 500 articles and chapters, and has edited the textbook Cancer Medicine. Moreover, since 2003, he has been recognized by the Institute for Scientific Informal as one of the most frequently cited scientists in his field. Dr. Bast continues to care for patients with breast and ovarian cancers and has been listed in the Best Doctors of America since 1992 and in America’s Top Physicians since 2003.