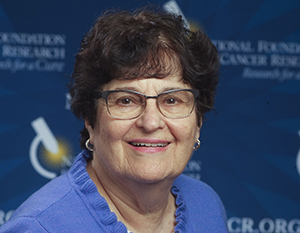 Dr. Horwitz is a pioneer in cancer research, having significantly contributed to development of the anti-cancer drug Taxol®, a natural compound in the Pacific yew tree bark. She discovered how Taxol works to be an effective anti-cancer agent because it binds to a cell’s internal machinery, known as tubulin, and blocks the cancer cell’s ability to replicate. Taxol, one of the most widely prescribed chemotherapy agents, has treated over 1.5 million patients with breast, lung, ovarian, cervical and pancreatic cancers. While Taxol therapy is effective for many patients, resistance to the drug is a clinical problem.

With NFCR support since 2000, Dr. Horwitz discovered that cells express different forms of tubulin, and Taxol’s ability to effectively arrest cancer cell growth depends upon the tubulin type present in a patient’s cancer. Her team is investigating how Taxol interacts with all forms of tubulin which could become the basis to predict whether a patient’s tumor will be sensitive or resistant to the drug. Dr. Horwitz’s research efforts to use natural products for developing cancer therapeutics with minimal toxicity led the research community to discover an additional chemotherapy agent, discodermolide, isolated from a Caribbean Sea sponge. Discodermolide, while effective in killing cancer, is not used in patients due to lung toxicity. Dr. Horwitz and fellow NFCR scientist and chemist, Dr. Amos Smith III, are together leading the charge to create discodermolide variations which can effectively kill cancer without damaging the lungs and inducing an aggressive and drug-resistant property of cancer known as senescence. Development of a clinically adopted version of discodermolide may be effective in treating patients with triple negative breast cancer and other cancers.

Susan Band Horwitz, Ph.D., is a Distinguished Professor at the Albert Einstein College of Medicine. She is also the co-chair of the Department of Molecular Pharmacology and the Rose C. Falkenstein Chair in Cancer Research.

Dr. Horwitz grew up in Boston, went to Bryn Mawr College and received her Ph.D. in Biochemistry from Brandeis University. Dr. Horwitz worked as a postdoctoral fellow at Tufts University’s Medical School and at Emory University’s School of Medicine. In 1967, she began work at the Albert Einstein College of Medicine.

Over the course of her career, Dr. Horwitz’s work has been published over 250 times, and she has received numerous accolades including: the C. Chester Stock Award from Memorial Sloan Kettering Cancer Center; the Warren Alpert Foundation Prize from Harvard Medical School; the Bristol-Myers Squibb Award for Distinguished Achievement in Cancer Research; the American Cancer Society’s Medal of Honor; the AACR Award for Lifetime Achievement in Cancer Research; the Canada Gairdner International Award; and the Szent-Györgyi Prize for Progress in Cancer Research.

Your ticket for the: Susan Band Horwitz, Ph.D.