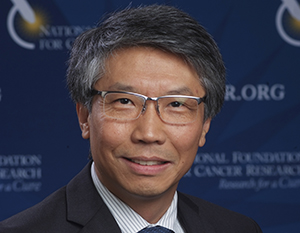 Dr. Zhang is a leader of precision oncology, using NFCR support since 2006 to characterize underlying genetic mechanisms responsible for cancer growth and progression. His research addresses the variability in cellular properties, within and across cancer types, which often leads to treatment resistance and poor survival in patients. For example, African-Americans diagnosed with lung cancer have higher incidences and lower survival rates than Caucasian Americans. Utilizing leading-edge genomic techniques, Dr. Zhang discovered that lung cancer in African-Americans expressed higher immunosuppressive components, permitting the lung cancer to escape attack by their immune system.

Dr. Zhang’s research has advanced our understanding of the role of genetic mutations in cancer progression and treatment: 1) lung cancer in African-Americans expresses a mutation in the TP53 tumor suppressor gene, leading to shorter survival times; 2) daily alcohol consumption causes DNA damage and changes in over 600 genes shown to be involved in cancer development; and 3) development of new computational methods utilizing artificial intelligence can predict the origin of cancers that have metastasized to the brain. Dr. Zhang’s precision oncology approach has the potential to improve outcomes for patients with non-Hodgkin’s lymphoma and leukemia, melanoma, and cancers of the lung, gastrointestinal tract, pancreas, ovary, uterus, brain and liver.

Wei Zhang, Ph.D., is the Director of Cancer Genomics and Precision Oncology at the Comprehensive Cancer Center of Wake Forest. He is also co-director of one of the Genome Data Analysis Centers.

Dr. Zhang has published more than 320 peer-reviewed papers and his research has been supported by numerous grants from the National Cancer Institute, the Department of Defense, the Texas Higher Education Coordinating Board and several foundations, including NFCR, the Goldhirsh Foundation, the James S. McDonald Foundation and the Shriver Initiatives for Sarcoma.

Your ticket for the: Wei Zhang, Ph.D.